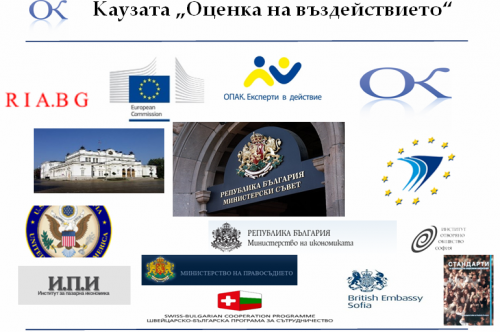 On July 8, 2016 a round table dedicated to “Regulatory Impact Assessment”, organized by the Center for Prevention and Countering Corruption and Organized Crime (BORKOR) and the Council for Administrative Reform with the Council of Ministers took place in Sofia.

The participants in the event were welcomed by the Secretary of the Council for Administrative Reform Mr. Anton Gerunov – Head of the Political Cabinet of the Deputy Prime Minister for Coalition Policy and Public Administration and a Minister of Interior and Ms. Eleonora Nikolova – acting as Executive Director of BORKOR.

The roundtable was one of the first high-level events where the challenges and perspective before the Bulgarian rulemaking process were presented after the promulgation of the Law on Normative Acts, which governs mandatory Regulatory Impact Assessment and the assessment of specific impacts and the expectations related to its implementation after its entry into force on 04.11.2016.
The Center for Regulatory Impact Assessment was represented at the event by its Chairman Mr. Tony Dimov.

One of the most impressing presentations was that of Mr. Iskren Ivanov – Chief expert in the Department for „Modernization of the administration” from the Administration of the Council of Ministers, who spoke about the „Impact Assessment” Cause, extracts of which we publish here.